I took a break from fostering last year. I was living in an apartment. I had a run of fosters that were very destructive. The last one I had before I took my break was with me for over 4 months and was very trying. She was a “velcro” dog. This term refers to a dog that must be near you (preferably touching you) at all times. There is no exception for sleep or cooking or using the bathroom. There was not a single night that dog wasn’t under the covers and between my knees all night. There was not a single potty break in which she was not trying to climb into my lap.
It was overwhelming. I was smothered.
So I took a break.

In November I moved into a house. It’s a smallish house but the backyard is huge. Well… compared to an apartment it’s huge. I now have about 0.2 acres surrounded by a 6-8 foot privacy fence. This yard is perfect for dogs. Well… almost perfect. They gate doesn’t latch and blows open sometimes. Also, it was filled with rabbits, squirrels, and birds.
Was.

The point is, this yard gave the me a good reason to start fostering again. So as soon as I was moved in I took in a dog. Tori.

Tori, like my Rocko, was adopted from the rescue I work with when she was a puppy. About a year later the woman who adopted Tori decided she didn’t want her anymore. The reasons are irrelevant. When someone wants to return a dog they will often make up reasons to rationalize and justify their actions. Sometimes they actually believe the reasons they have fabricated. I don’t mind because the dog is back with us and not being left outside or thrown out of a moving car.

Tori has a lot of energy. She sometimes resembles the Looney Tunes Tasmanian Devil. This dog looks a lot like a boxer that has been miniaturized. Imagine, however, that as her size was decreased her speed and stamina were increased. She runs at full speed all the time, she waves her open mouth around wildly, and she can jump impossibly high. She has caused minor injuries while whirling around crazily, but when she’s done she is the sweetest little lap dog. She just wants to cuddle next to you and sleep on the sofa while you watch tv. She doesn’t know she’s insane.

I’ve had Tori for 2 months now. I don’t understand why no one wants her sweet face in their home. She’s housebroken, has two eyes, and doesn’t chew on furniture. She even tucks herself in at night! I just don’t understand how any dog with those qualities doesn’t get adopted.
Seriously… look at this face. 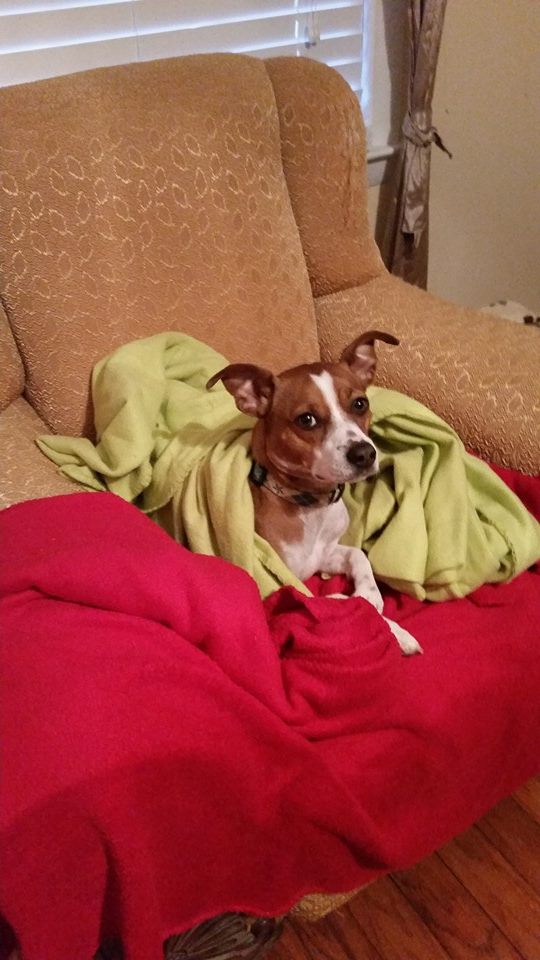 Tori tucks herself in for bedtime

This dog has supermodel in her genes

Tori is an angel when she’s sleeping